The Story of Maria – HIV and Cultural Beliefs in Timor-Leste

Working in communications for NGO’s we like to tell good news stories – but some stories are so moving and sad, they should be shared too. We can only hope that something good can come from this tragedy.

Family in Timor-Leste has a powerful influence. Here is a story about Maria (not her real name), that ended in heartbreak. Maria was 32 years old, divorced and had four small children. Divorce is not very common in Timor-Leste because of the strong Catholic beliefs. Maria was HIV positive.

The HIV Team from Maluk Timor did what they do with every new HIV patient:  they discussed with her about HIV, what the test results mean, that HIV can’t be cured, but with medication it can be managed. They said she would have to take drugs for the rest of her life but she will survive. They offered her psychological support counselling.

The problem started when Maria didn’t come back after the first appointment. They found out that she was following “Kultura” – the cultural and ritual way of dealing with illness.

Maria’s contracted COVID and ended up in an isolation centre – and so began her rollercoaster ride for her health. We sat with the family and worked out a plan to treat her HIV, but even when she was clear of COVID, she had complications from the HIV and had to go to hospital. When she began  to improve, her family would bring her home and go back to traditional ways – sometimes combined with the HIV medications. Each time, something would land Maria back into hospital – TB, Pneumonia. This went on for months.

I was so worried for Maria, I visited her at home, and she was not doing well. I talked with the family again and explained that she needed to be admitted to hospital. They agreed and I called the ambulance. She was there about 3 weeks. She had more tests, drugs were administered and she started to improve. The family had her discharged again and decided to take her back to their home district. After a few days, I contacted them to make sure she was taking the drugs – yes and she was also doing traditional medicine treatment.

We decided we should go and visit the family in their District. I wanted to see for myself how the patient was. Maria told us that she wanted to go back to the hospital, but the family wanted her to try for a bit longer with the traditional medicine and Kultura but they would also give her the Antiretroviral Treatment (ART).  After another week, I went back with some more drugs, but Maria’s conditioned had worsened. I tried to explain everything again to the family that she needed to keep taking her treatment.

After a few more days, the family brought Maria back to Dili as she was very ill.

I think they realised she was dying. The next day I visited her at home but there was nothing that could be done except offer her palliative care. It was so sad. I was very stressed about the way the family was treating her;  Maria could barely eat anything, but her mother kept forcing her to eat porridge; hitting her and yelling at her, but she kept bringing it up. I didn’t understand her mother’s behaviour – maybe she believed if she ate food she would get well again.

Maria was in a lot of pain, and we had to find injectable painkillers, as she couldn’t keep tablets down. We must have gone to every pharmacy and clinic in Dili, but finally found some. We wanted to do something to ease her pain.

Maria passed away when she could have lived for many years if taking the right medications.

In Timor-Leste, decisions are made by the family together; we can’t make them on our own.  In situations like these, it is so frustrating, as we know what needs to be done so that people can get well.

A belief system that is long held for generations often can’t compete with the fact that there is still no cure for HIV; they just think we are wrong.

But we will, and do keep fighting, because we have a way to treat HIV and that people can live long lives.

We only can hope that when Maria passed away that she was at peace and  she knew we  did everything possible to support her until the end. We hope that the family has learnt even a little from this whole experience.

By the end of the interview, the Team was in tears as with us. They put so much effort into trying to help Maria, but around every corner, they hit hurdles. The team of course understand the importance of family and especially their role in decision-making; they understand people’s strong and deep belief in traditional medicine and Kultura.

Marias story is not about judgement of her family, but to show that even with all the in-roads with HIV, there is still much to overcome. These deeply held beliefs that illness can be cured by using traditional ways, may take generations before there is a shift in thinking for some.  But we will and do keep fighting, because we have a way to treat HIV and that people can live long lives.

HIV is a difficult and complex disease. This combined with deep-held beliefs reaching back 100’s of years, combined with the stigma HIV, has left the team heart-broken and frustrated, but more determined to continue the amazing work that they do. 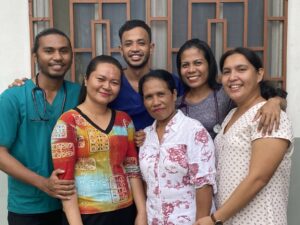