Meet Elvira and Maria – two survivors of TB and now Maluk Timor’s TB Counsellors at Klibur Domin (KD*) Health Clinic.  Using their own hardship and experience of suffering from TB, they have dedicated their work life to help others suffering from TB.

Elvira Gomez de Silva used to be a driver for the United Nations; an unusual occupation for a woman in Timor-Leste. After she left the job, she developed a cough and was tired all the time. I thought it might have been the air conditioning. I coughed for a year and then my son who is a doctor, finally convinced me to have a TB Test at Bairo Pite Clinic and I was positive. I had the worse strain of TB – Multi-Drug Resistant (MDR) and I spent 6 months there and then was discharged. But I really hadn’t recovered so I returned and spent another 20 months until I was fully recuperated. 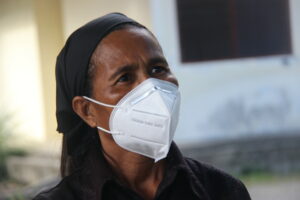 This was four years ago – and Elvira is now 56 years old. It was hard being away from family, especially for so long. My husband had already passed away – so I had to be both mother and father for my family.

Maria Madalena Hade was originally from Atambua in West Timor and used to volunteer at a clinic working with TB patients. I collected data, and collected sputum; we never wore a mask, we never used PPE. This was 2015 – 2017. After I left, I started to get symptoms of TB; I tested positive and admitted to KD. I was there for 8 months treatment until I had fully recovered. I was lucky that I did not have MDR TB and lucky that my husband could look after the children. Maria is 45 years old and has four children. Maria – I was interested to take up the opportunity to work with TB patients because I suffered through it – so I know what people are going through. I do counselling and education. If someone is stressed, I try to inspire, motivate, encourage, and even entertain by playing games together. When I was recuperating, KD didn’t have TB Counsellors and I thought how good it would have been to be able to support people through such a terrible but curable disease.

Elvira – I hadn’t heard of Maluk Timor before I started working with them. One day I had a phone call from KD and they said there was a job to counsel for TB patients. I was afraid, as I did not want to get sick again – but they talked it through with me and assured me. They showed me the guidelines and gave us training. When I was sick, there were counselling sessions, but I never participated as I was so sick.

Elvira – I had to take so many drugs that it made my head fuzzy, it made me feel a little crazy.  I took 20 tablets and an injection every day. I wrote it all down to help me get through – by the time I recovered I  had taken 8374 tablets and had 180 injections.  It was hard to stand and I could barely walk – it was as if my brain was not working, I had pain and I had no energy; I wanted to die. There were no counsellors as we have now to help us – just group session.

Maria – I am so motivated by the work that I do; I see patients suffering every day – I was like that before. I just want to encourage them and keeping supporting them so they can recover and get back to their family again.

Elvira – I love my work as a counsellor. I suffered so much when I was sick, I know exactly how people feel. I gauge their reactions; if the patient is sad or depressed I stop. I have a chat, I try to relax them and when they feel a bit better, I continue helping them take their medications. I know what I do is helping people – a little encouragement and understanding helps them to get through this difficult disease – they don’t feel alone.

Sitting under the banana and fig trees in this idyllic setting of KD, we all stop to reflect how lucky we are to have such a facility in Timor-Leste. These two extraordinary women – helping people through such hardship of recovering from TB. Being there for people every day – easing their pain and giving hope.  All, which is made possible by generous donors such as John Burge Trust and the Burnet Institute.